How to build a shaker style range hood

So, we're still working on our kitchen.  Seriously.  Longest.  Reno.  Ever. (Just kidding.  We tore our basement out two + years ago).  Anyway, We're finally coming around the home stretch.  I don't have updated pictures of everything to share, but I wanted to take the time to let you all know how I went about building my range hood, because it was something that I really took a lot of time and researching to figure out how the heck to go about.

First of all, when you decide you're going to build a range hood, you're going to need two main parts- a power pack, which is the actual fan/blower/vent thing, and a hood liner.

We went with the Zephyr Tornado I.  Honestly, I bought this one because I found it on ebay used for 1/3 of it's retail price.  Since I'm kind of (really) cheap (frugal), and we don't know if we'll be selling or renting our place in a year when we leave for fellowship- and I know, I didn't tell you all about that either...soooo behind- I went the most economical route to get it done. 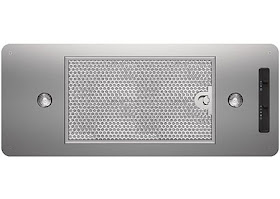 I can't find a stock picture of the liner online, but it's essentially a stainless steel box.  Here's the thing- you do actually need this.  When you cook, the grease goes up and into the bottom of this blower and surrounding area.  Without the metal liner, cleaning is going to be a pain.  On top of that, you're cooking over a wood box.  It's just safer to cover it so you're not cooking over a flammable surface.

In case you're wondering for yourself- I also tried thinking of every and any way I could make the liner myself.  Unless you are a metal worker- you can't.  Just cough up the dough, and buy the liner.

Ooookay. Now onto the building part.

The first thing I did was build a box.  I had exactly 30" between our 9" cabinet and the window, so I built my box 30" wide.  The depth is something you can play with, but keep in mind that you want it to extend over your front burners so you can essentially trap the rising steam/oil/cooking junk within the box to push it into the power pack.  Mine extends out about 22" from the wall.  I used 1x4" pine boards (in hindsight, I would've used 6" instead), which are actually only 3/4" thick, and mitered the corners.  Inside the box is a 3/4" thick sheet of plywood.  To find your measurement for the plywood, you just take your overall box size, and subtract 1 1/2" from the width and depth since you have 3/4" thickness on every side.  Don't attach the plywood until you've put your hood liner in place to fit. 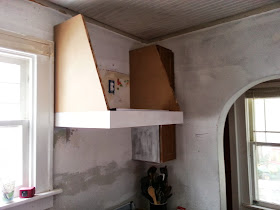 Anyway- so build your box, and then put your liner in for fit.  There's a cut out in the middle of the liner where your power pack will go.  Trace that, remove the liner, and cut the shape out with a jig saw.  Then you can put your liner back in and adjust the plywood to the height inside the box it needs to be to contact the liner.  I attached my plywood to the box with my Kregg, and then I attached the entire box to the wall through the back, into the studs, and into the neighboring cabinet, and if I had a cabinet on the opposite side, I would've attached it to that too.  Once in place, you can install your liner via directions it came with, then put your power pack in. 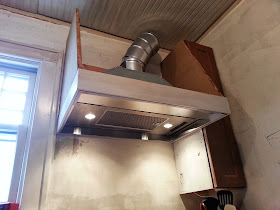 At this point, you want to dry fit your duct work.  You can see in the photo that I had to put a slight curve on mine.  That's because we found that we have a sewer line running at a slight angle between the window and the first stud, and I wanted to be absolutely sure that I'd miss that when I went to cut this huge 6" hole.

Once I had the duct work where I wanted it, I traced around the spot on the wall.  I cut through the interior wall with a jigsaw, and drilled pilot holes through to the outside at the very top, bottom, left, and right.  When I went outside to drill the hole, I just had to line up a piece of duct up to it, trace, and cut again with the jigsaw (with a wood/metal blade).  We went through a layer of vinyl siding, the original wood siding, and the wood frame work just fine with a jigsaw, and attached the outer vent.  I did not buy the vent from the Zephyr website.  It was $40, plus tax and shipping, and it didn't even come with a damper to decrease cold/warm air movement.  Instead, I bought an $8 vent at Menards that has a grate and damper.  Perfect.  Once installed on the outside, I attached the duct work on the inside, and taped every joint with duct tape.

Now, I know you've been seeing the sides in my posts above.  I initially had decided I wanted a box shaped hood.  Then as I looked and thought, I decided that it may look too obtrusive in my little space to have an entire box extending 22" from my wall, so I decided to go with an angled design.  Obviously, this takes a little more calculation and work- but it's totally doable.  For my measurements, I measured the distance from the top of my box to the top of the spice cabinet next to it.  I marked that out on my MDF, and then marked out 12" from the top of it and 22" from the bottom.  I drew a line connecting the 12 to 22 and that was my shape.  I used the original edge of the MDF for the straight side, and cut the angle using a circular saw.  I attached a support bar to the back of the two panels, and used my Kregg to attach the panels to the box.

The next step was the face frame-- where we finally close the box in and start making it pretty!  I didn't get all fancy building rails and styles with this.  I just cut my 2 1/2" MDF boards to the right sizes and connected them with the Kregg.  When building face frames, you want to always make sure you're hiding the end of the wood.  To do this, you make your vertical pieces (stiles) the full length they should be, and your horizontal pieces (rails) the overall width minus the width of the two stiles.  I used two additional stiles in the middle, and did a little math to figure out their placement. 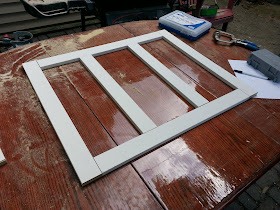 Here it is roughly in place.  You can see the top sticks up further than the rest of the box, and the bottom doesn't fit flush either.  I was only worried about cutting the angle on top so it was flat like the rest of the cabinetry for me to add trim to later.  To do that, I just eyeballed where it was level, marked it, and cut it with a table saw. 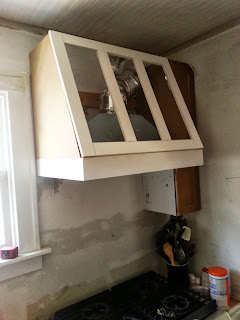 After it was trimmed, I added a sheet of 1/4" luan to the back using a bead of glue and some staples.  Then I nailed the face frame in place with brad nails.  The final step was to add trim around the lower box.  I used a base cap shoe molding around the edges, and a coping saw to make it fit around the windows, and to allow the cabinet door on the opposite side open and close.  Remember how I said I wished I'd used 6" boards instead?  This is why.  I didn't have a lot of room to anchor my molding on without it looking squished and silly.  So my upper molding is JUST barely covering the upper seam where the box and face frame meet (where I didn't cut an angle), and I attached the lower molding to a square piece of trim that I drove up through the bottom of the box to finish it off. 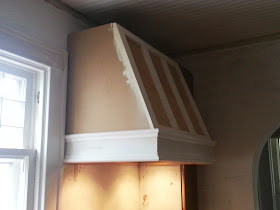 And here you can see how we've begun adding the molding to the top of the cabinets. 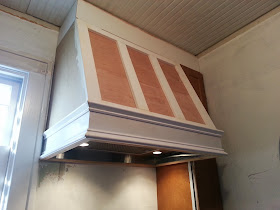 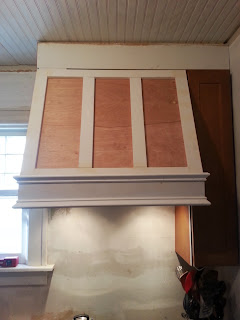 And here it is with all the trim/crown in place along the upper. 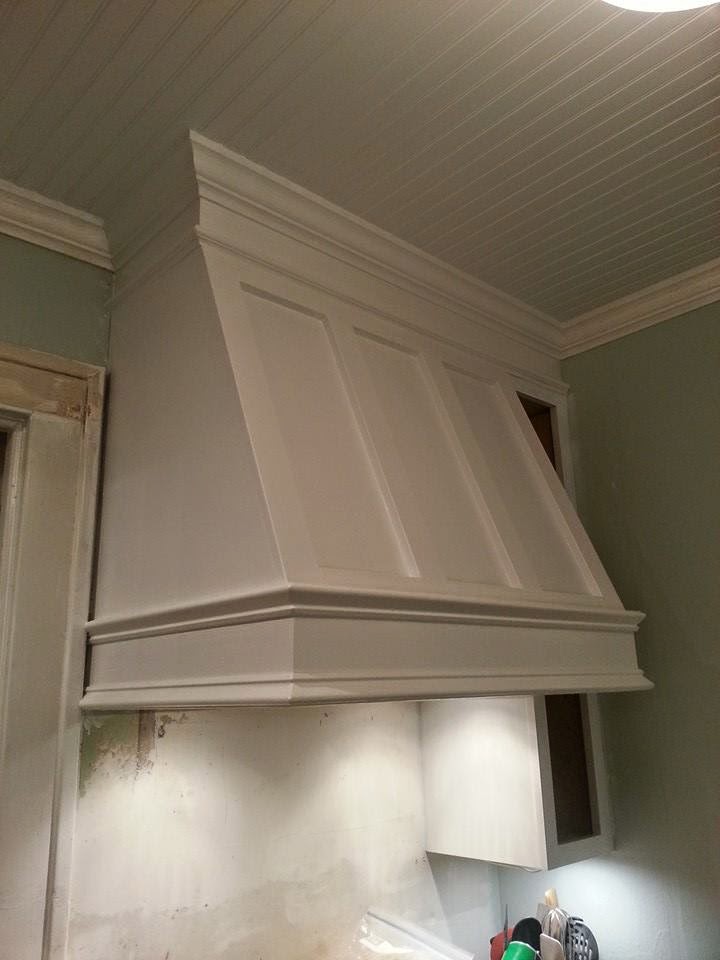 And the finished look in the kitchen 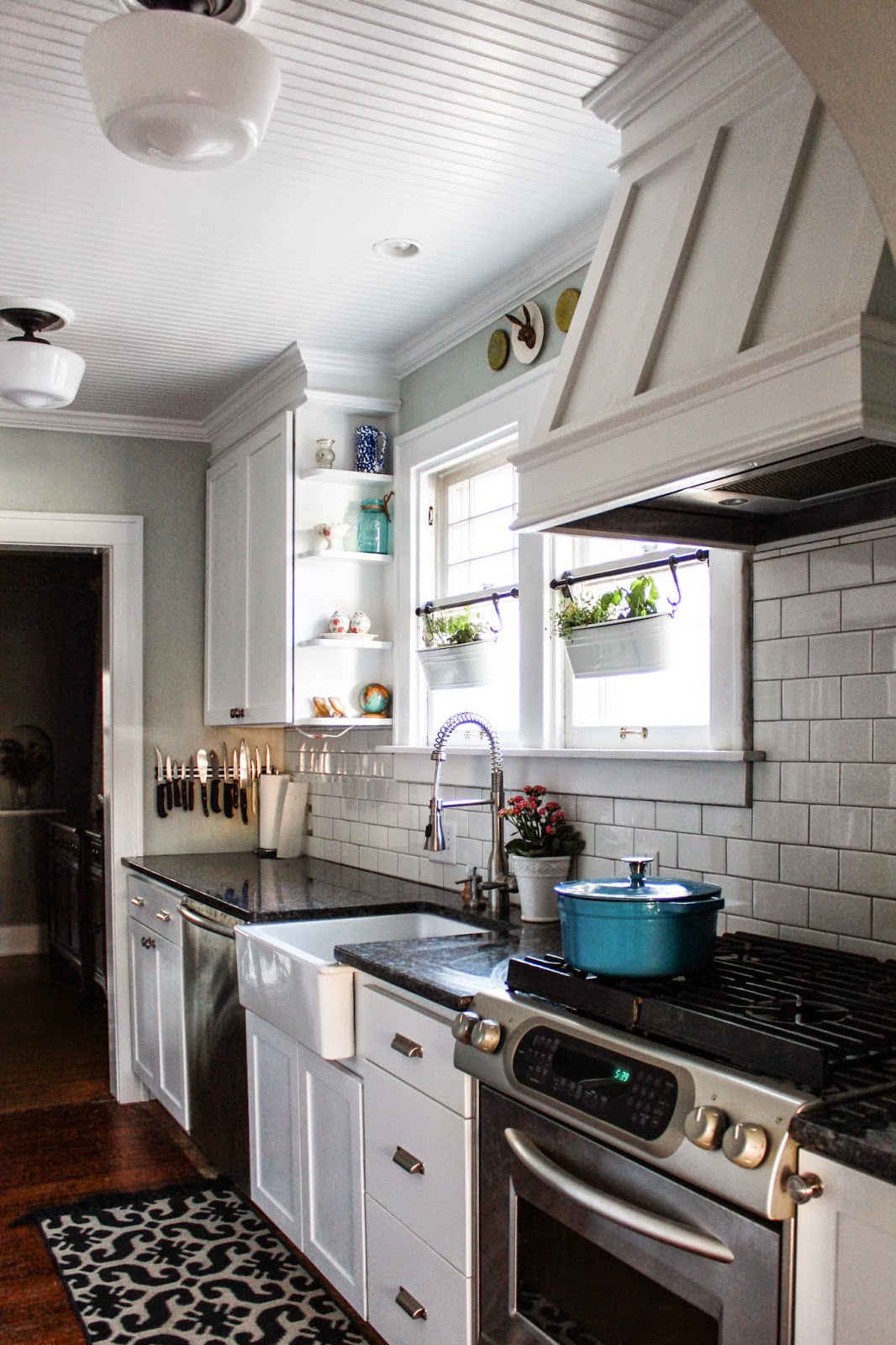 Hopefully if you're trying to figure out just how to build one of these bad boys yourself, you'll find some answers here!  It's really not difficult or expensive, and the look it adds to your kitchen is AMAZING.

And just to keep with my history- here's a little furniture dump for the road! 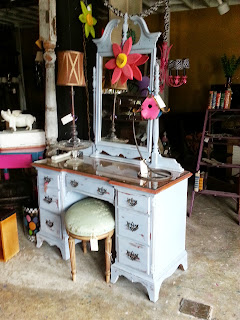 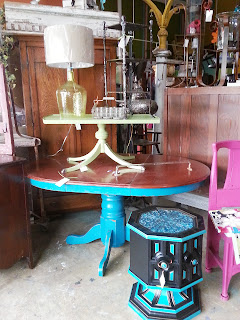 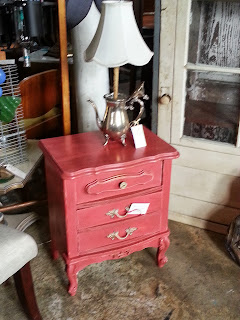 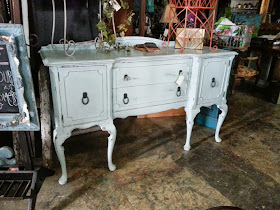 Onto the next thing,

I love to hear from you! If you have a detailed question, please email me at ConfessionsofaDIYaholic@gmail.com.